The better way to sell online

Amazon has been forced to pull more than 400,000 products from its shelves in India - because it owned or had invested in the companies selling these products.

It used these companies to create and sell products in India in direct competition with regular merchants using the Amazon platform. A new law in India has made it illegal for the owners of eCommerce platforms to complete with their customers - i.e. the merchants.

Amazon, designed to be a marketplace to provide businesses with the opportunity to sell products, has begun to analyse which products are successful and launch cheaper imitations. This means that if you have a bestselling product on the site, Amazon might copy and sell your product to improve its own profit margin.

In fact, AmazonBasics, Amazon’s own brand, is based largely off products which other people have sold on the website. For example, the laptop stand below: 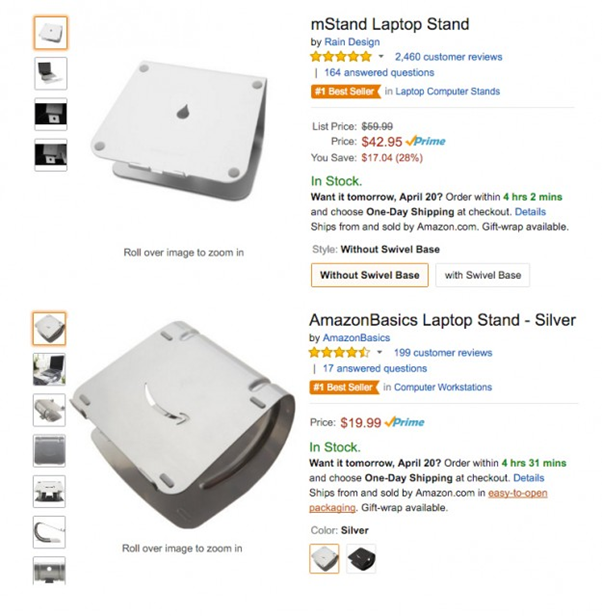 The Rain Design laptop stand was a best seller with stellar reviews, selling for just over $40. Amazon identified its popularity, designed and released an almost identical product, and was able to cut down the price to $20 using its competitive advantage. Once it was launched, sales for the original product slowed dramatically.

Amazon is simply bigger, and has more resources, than the businesses which use its platform. As a result, there’s nothing businesses can truly do to defend themselves against Amazon – while depending on it to earn a living.

The imitations are so clear that the EU has launched an investigation to examine the ethical and legal implications of Amazon copying its own customers.

In addition, Amazon has now been forced to remove around 400,000 of its imitator products as the result of new regulations in India, designed to protect the businesses which use the site.

The new laws prevent sellers from placing their products on platforms which count as investors in their own businesses. As a result, Amazon will be unable to sell its own products using the Amazon marketplace.

Interestingly, a 2016 ruling decreed that Amazon would no longer be allowed to own inventory, and instead function only as the marketplace it was intended to be. But instead of ending their product lines Amazon simply begun selling through partners; using them to list their products on the website.

This new law hopes to crack down on that loophole: preventing Amazon from using the partner tactic to take advantage of its userbase.

If Amazon wants to continue selling its home brand products in India it will need to change its business model – and experts expect it will take just six months for them to find a workaround. Once that has happened, there’s no guarantee that Amazon won’t return to imitating its own users.

So if you want to sell your own products online, and not pay a percentage fee to a company that might imitate your products and undercut your business, don’t use Amazon: use ShopFactory. By owning your own store, you’ll have full control of your pricing and product management – and unlike Amazon, we won’t compete with you: our success is based on yours.

ShopFactory Tutorials
Watch our tutorial videos to see how easy building and managing an online store can be.

ShopFactory
Bring your store to life with ShopFactory. The better way to sell online. ShopFactory is the easy way to create mobile friendly websites and online stores.

Bring your store to life with ShopFactory.
ShopFactory is the easy way to create mobile friendly websites and online stores.